Results from Design for Additive Manufacturing

A month ago we wrote an entry that showed an exercise to incorporate greater complexity into 3D printed products. The article makes a short review of the role of complexity in product architecture and how it influences our manufacturing costs and the way we build businesses around a product. Then, we continued to explain how the main advantage of 3D printing is the available free complexity and how it can be harnessed through a concurrent design process. Through the process proposed by Remi Ponche and his team of researchers, we can incorporate the printer as a connector of functional components despite its complexity. We finally concluded with an example of the implemented process in a little workshop carried out in the Ballerup library located in Copenhagen Denmark. In this example, we implemented a “forced analogy” ideation method to connect concepts that were very difficult to relate. Following the process proposed by Dr Ponche et al. we used the available tools in the software and printer to create a product that exploited the advantages of 3D printing.

The final product was being printed by the time the post was published. Therefore, we wanted to show the final result to wrap up the complete process. This product, which we call “Cyggle” ( a mixture of danish words CYKLE & Gløgg) took 80 hours for printing and 750 gms of PLA platic, a bit too much, but a good start for a first product iteration.

According to the process, the Cyggle was produced to damp uncontrolled bicycle handlebar movements when we ride home drunk from a party. The volume was optimized to transfer the force of the handlebar to the frame through a “rib” volume that goes around (that is why it has a round shape). Additionally, we included a beer holder just in case party is not over.

The 1.5 mm fins that make our structure flexible were printed without problems. As we can see in the images above, the printing orientation aligns with the direction of the force between the handlebar and the frame. Accordingly, a minimal amount of support material was needed. Over the final bicycle, the product fitted correctly.  The clamp mechanism should be redesigned since the current one does not allow us to remove the Cyggle after the first installation. The cup holder dimensions work perfectly but could use some support for “tall boy” cans and bottles. 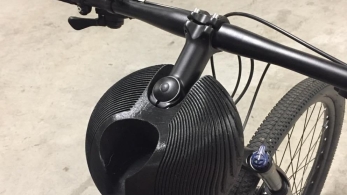 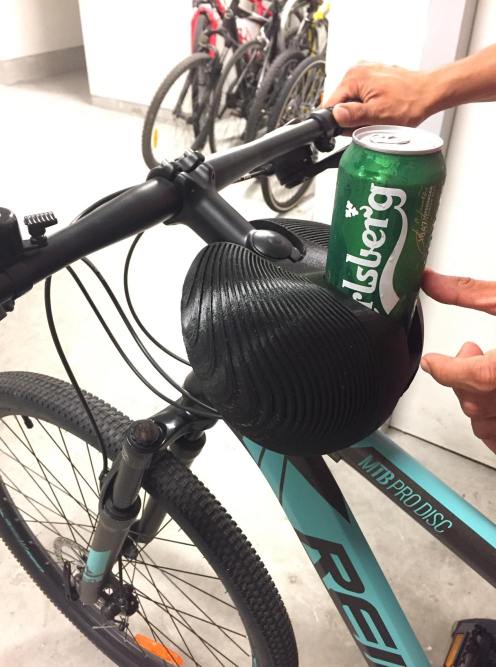 The flexibility of the fins works just as simulated creating more resistance as they touch each other. Trials of fatigue could be held with this prototype but there is no visible sign of extreme exhaustion. Nevertheless, the contact surface can also be optimized to damp the shear forces when in contact with the handlebar.

Overall the process demonstrates that complexity in product architecture is achievable with 3D printing regardless the layering process. The fact that this example makes use of a regular MakerBot FDM printer proves that the most simple 3D printers present in local FABLABS are enough to bring up complex ideas that can give birth to innovative concepts and businesses.

One response to “Results from Design for Additive Manufacturing”